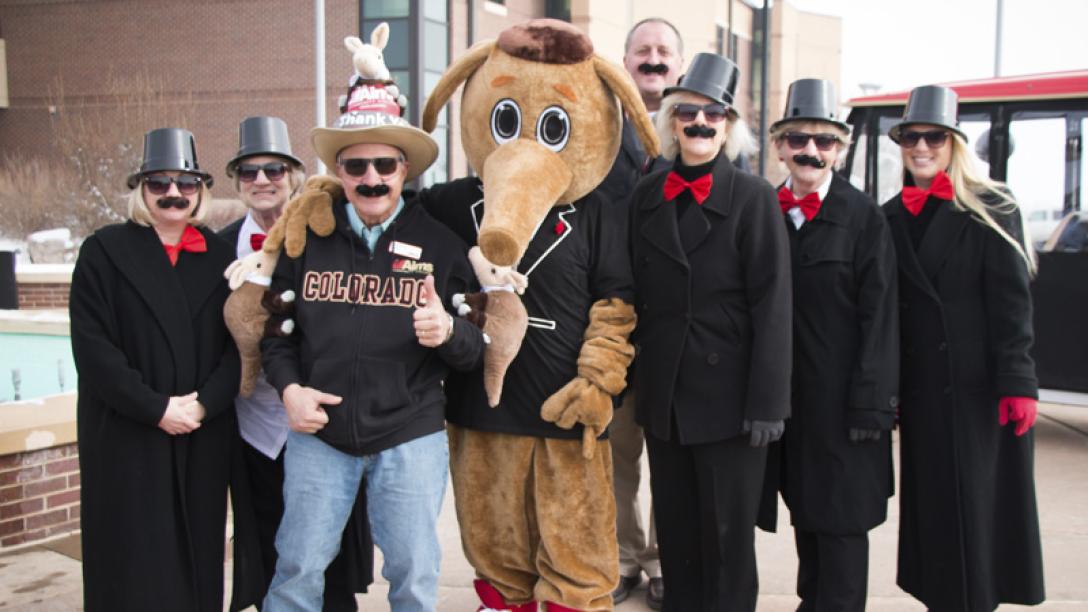 Aims’ CEO and President Leah L. Bornstein and Board of Trustee Mark Hout led the ceremony while members of Aims’ Cabinet donned top hats, mustaches and bow ties as Arty’s Inner Circle for this special occasion.

Arty arrived riding in the debut appearance of the Aims Artymobile, an eight passenger touring cart recently acquired by the Admissions, Advising, and Recruitment team. While this eight person cart will assist in providing an efficient full scope of the campus during tours, today it ushered in the guest of honor with an entourage from that team. He made his way to the podium and delivered good news in his native tongue, Groundvarkese, as translated by Trustee Hout, “Despite this snow, as you know, Northern Colorado weather changes are more than a trend. Perchance this winter has come to an end? Oh, no, no for I see my nose shadow has been cast. Six more weeks of winter is in my forecast!” The prognostication was met with celebrations from the crowd.” Unlike last year, Arty’s cousin, the famed Punxsutawney Phil, made the same prediction as Arty this year.

“Arty the Aardvark represents the pride we share and very purpose of Aims: Build a Stronger Community,” said Aims’ CEO and President Dr. Leah L. Bornstein. “Arty’s character exhibits Aims’ commitment to meaningful relationships, creating shared memories, providing a nurturing environment for all who come to Aims and a sincere investment in the future. Students receive tremendous value with quality and affordable education at Aims, along with a caring culture that likes to have a little fun.”

About Arty the Aardvark
Aardvarks were a favorite of Aims’ first President, Dr. Ed Beaty. Soon after Aims moved from the original location and into its new home in west Greeley, the students voted the aardvark as the official mascot and later named him, Arty. In 1969, Arty was replaced as the mascot by a Saint Bernard, but the aardvark made a return in the 80’s with the creation of the Howling Aardvarks fictitious football team. Arty, in his modern form, is just beginning to return to the Aims community with a fresh look and energy. You can spot him at many Aims events spreading cheer to the crowds. Learn more about Arty the Aardvark.