Aims Community College students shot drone footage for two regional Toyota commercials this year. This opportunity allowed students to work with state-of-the-art equipment to create a professional-level production for a major national brand. Projects like this provide Aims students with professional and portfolio-building experiences that set them up to be marketable in the workforce. 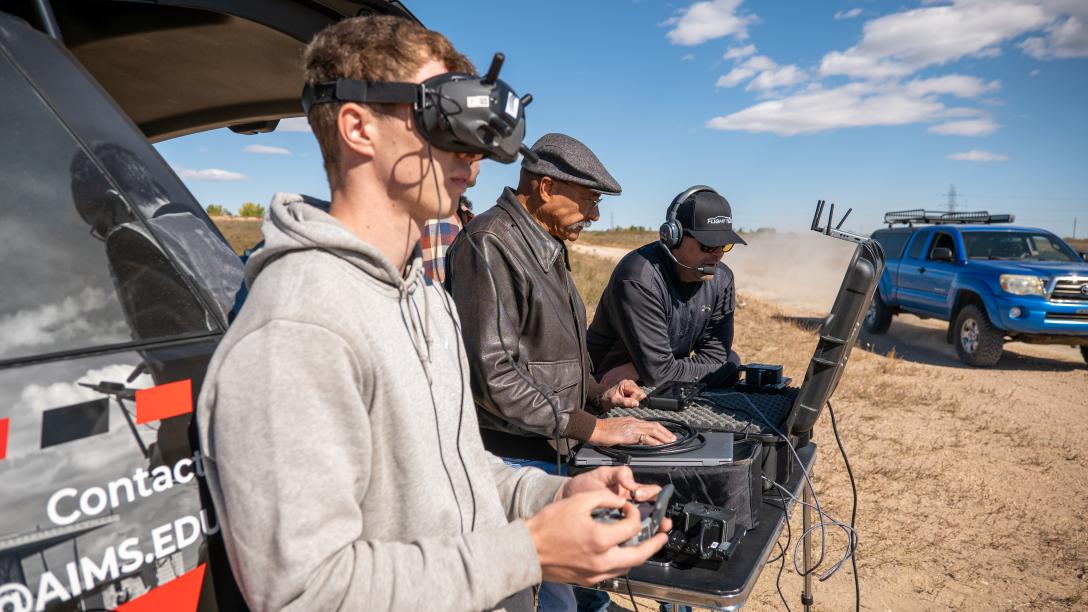 “It's very exciting to see our learners involved in practical application and out in public and visible,” said Dr. Leah L. Bornstein, Aims Community College CEO and president.

The commercials were filmed in May and October 2022. This opportunity was through a partnership with the Community College of Aurora's Colorado Film School (CFS) and a contract with the Saatchi & Saatchi advertising agency. CFS has produced regional Toyota spots for several years for Saatchi & Saatchi, however, students at CFS do not have specialized training in operating drones for video. Aims students in the Unmanned Aerial Systems (UAS) Basic Operator Certificate learn how to fly drones for film production and other uses such as construction management, local government mapping and more. Aims UAS students worked with the production team to get aerial shots for the commercials.

Six Aims students took part in each commercial. Aims staff estimates that each student put approximately 50 hours into this production. The commercial pre-production started two months before the day of the filming, and students sat in on the production meetings. The team was provided with past commercials that they studied and built scenarios in preparation.

The Aims crew practiced gathering shots under similar conditions. Students also operated on the drones, cameras, monitors, controllers and equipment used in the production. Some of the shots needed a dual-operator setup; one person flew the drone, and the other controlled the camera.

“They're all doing high-speed chasing, working through their shot list,” Marshall said.  These action shots included following a moving car on winding dirt roads, swooping in front of the vehicle, maneuvering through trees, and spinning in the air to capture video with a fast-paced feel to create a cinematic commercial.

“Our students had to learn storyboards and the lingo and really pay attention to what the director was seeking. That determined the shots and what kind of flying we must do to stay in line with that storytelling, which is huge,” Marshall said. “This experience solidified what students are learning in our classes.”

Jeremy Bleakley, a student and work-study tech in the Aims UAS program, worked on the commercial. “It was challenging in a good way. Being able to work at the site and get a feel of how that all works was exciting.”  He also loved how the commercial brought people together. “It really builds some camaraderie with a crew outside of the group that you normally work with there at the college, too,”

Another student in the program, Derek Lofton, said, “As someone who loves cars, it's really cool to see the different edits that can go in instead of just the plain old side shot. I'm looking forward to testing everything I've learned in the past year and a half or flying up and then putting that toward the commercial.” Lofton said he loves flying drones, “It's like a bird, but like ten times better. You're flying in the first-person view. ”

With two successful commercials under their belts, the Aims UAS program will work on a third regional commercial in May 2023.

In addition to working on local filmmaking, the Aims UAS program has worked with Weld County to create updated maps through surveying work and 3D mapping. Aims also has working relationships with other colleges and universities, local governments, law enforcement agencies, and regional economic development on special projects.

UAS systems and applications are rapidly expanding, and skilled, certified pilots are already in demand. According to the FAA, the commercial, small non-model UAS fleet is forecast to nearly triple from 277,386 in 2018 to 835,211 in 2023, an average annual growth rate of 24.7 percent. Please visit aims.co/uas-certificate for more information about the Aims UAS program.